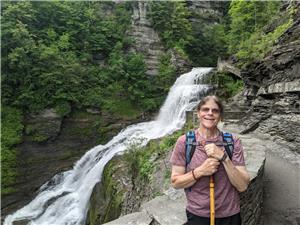 WILLIAM (BILL) HARVEY. August 10, 2021. His loss was completely unexpected, and the family is shocked and deeply saddened. Bill was the loving father of Ian (Lauren) and Erik. He is also survived by his brothers Dick (Scotti) and Jim (Kim). Bill was predeceased by his mother Maree and father Richard.

Bill was born on January 29, 1959 in Tarrytown, New York. After graduating from Willingboro High School in 1977, he went on to study at the Pennco Technical School of Electronics. Bill worked various jobs throughout his life, but his most proud job was stay-at-home Dad. He also served as a service technician, mailroom supervisor, entrepreneur for his vending machine company and shipper and receiver in the retail industry.

Bill's family meant more to him than anything else in the world, something he often mentioned. Anyone who knew Bill knew that he was the most loving father a family could ask for. He was unendingly proud of Ian and Erik and always did his best to support them. Bill loved cooking, hiking, camping, sports, and music - the stereo was always on in Bill's home. Bill had that universal Dad trait of being able to fix everything, and a deep, powerful laugh with the ability to light up any room.
Services were private. Contributions in his memory may be made to the American Heart Association (http://www2.heart.org/goto/BillHarvey).
To order memorial trees or send flowers to the family in memory of WILLIAM HARVEY, please visit our flower store.