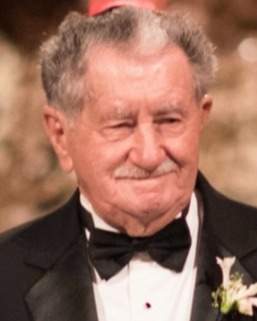 Kaufman, Samuel Died peacefully on August 25, 2022. Born in Pruzana, Poland to Leib and Ita Kaufman, he  had one sister and two brothers.  At 11 years old his idyllic life drastically changed due to the Nazi invasion.  He and his family were forced into a Jewish ghetto and then transported to the concentration camps of Birkenau and Auschwitz where the rest of his family perished in  the Holocaust.

In 1947 Samuel immigrated to New York and then Philadelphia where he soon met his beloved wife Elaine, another Holocaust survivor.  They not only survived but lived a fulfilling and meaningful life.  He always felt that the 58 years of marriage were his happiest years. Never afraid of a challenge, he learned English and mastered a trade which he turned into a successful construction company.

Always aware of their blessings, Sam and Elaine were active members of their local congregation and supporters of multiple charities. They retired to Atlantic City and Florida.  Sam’s prized possession was his family which he saw grow through 4 generations.  His wife Elaine preceded him in death. He is survived by his  children Bonnie Kay, Eydie Hammers (Steve), and  Larry Kaufman (Lynne), as well as 7 grandchildren, Taryn (Noah) Wortman, Jessica (Derrick) Bickel, Whitney (Tilghman) Gordon, Tori Hammers, Shawna Hammers, Joel (Leya) Kaufman,, Jennifer Kaufman and 7 great grandchildren Leo, Madison, Logan, Ryker, Carson, Ezra, and Theo.  We will all miss his irreverent sense of humor and affectionate good cheer. Graveside services will be held Sunday August 28, 11 AM at Shalom Memorial Park, Huntingdon Valley, PA. In lieu of flowers, donations may be made to The  Holocaust Resource Center at Stockton University or Congregation Shirat Hayam, Ventnor, NJ.

To order memorial trees or send flowers to the family in memory of Samuel Kaufman, please visit our flower store.