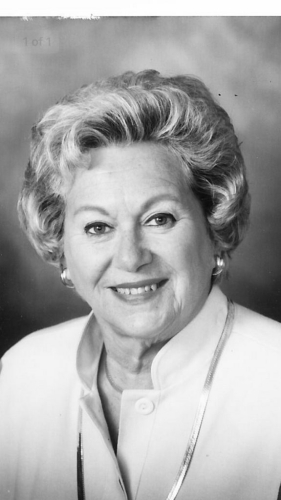 Muriel Ball Baltimore, of Kingston, died peacefully on Wednesday, May 31, 2017.

Born in Scranton to Freda and Charles Ball, she attended Marywood College and Penn State and graduated from Lackawanna Business College. She met her husband, David Baltimore, while on a date with his cousin, Herman, and they were married on New Year's Day, 1943, while he was home from Army Air Corps duty on a seven-day leave.

Muriel was totally devoted to David, with whom she had a 75-year long love affair that was strengthened and deepened by her family and her community.

With David, she helped build WBRE-TV into a formidable regional television entity, running studio camera during a labor issue, traveling to NBC meetings and conventions, plus making yearly sojourns to Wimbledon, the French Open, or the U.S. Open as members of the NBC family. It was at an International Programming Convention in France with David when he discovered the Smurfs and successfully introduced the Smurfs to NBC and America. A big part of their life was tennis and they enjoyed many, many years at the Valley Tennis and Swim Club. Muriel also crewed for David when sailing in regattas at the Harveys Lake Yacht Club.

Muriel was Wilkes-Barre's hostess with the mostest. She loved giving parties whether it was for family celebrations or opening her home for organizational luncheons and fundraisers. Our family gathered many times throughout the year for her delicious holiday dinners. Muriel didn't need much convincing to set a spectacular table. And, "oh that ice box cake!"

Muriel doted on her three children, Terry, Lynn and Charles, her grandchildren, Karin (and Jonathan Schweiger), Michael (and Robyn), Louis (and Lindsay), Ross, Molly and Lauren; plus her step-grandchildren, Dawson and Jason Hummel; and her only great-grandson, Jacob Schweiger. Facetiming became a regular thrill so she could keep track of how everyone was doing and growing. In Muriel's later years, especially after she lost David, she lived for phone calls and texts and pictures and as many contacts from family and friends as her day could allow.

Her list of community involvement is extensive. Among them: as an officer of the Temple B'nai B'rith Sisterhood, she chaired the sold-out premiere of "Around the World in 80 Days" at the Paramount Theatre (now the Kirby) as a fundraiser; and she chaired the 150th Double Diamond Anniversary celebration of the Temple; worked as a "Pink Lady" volunteer at the Wilkes-Barre General Hospital for 35 years plus it's Auxiliary; and she chaired the first ever Starlight Ball in 1968 at the Armory in Kingston. Muriel supported the efforts of the Osterhout Library where she became a life member and has the Great Room named in her honor; served on the boards of Visiting Nurse Association, Jewish Community Center, UJA and the Interfaith Council; volunteered for United Way fundraising, Hadassah, National Council of Jewish Women, Boy and Girl Scouts and Jewish Family Service.

Our family is eternally grateful for the loving attention of Muriel's "ladies": Barbara Gates, Louise Kondracki, Maureen Powell, Eleanor Zbegner, Veronica Hohol, Mary Simoncavage, Tina Hritzak, Regina, Tracey and Chrissie from Erwine's, and especially her "angel," Anne Gates. All have become part of our family and will always hold a place in our hearts.

To order memorial trees or send flowers to the family in memory of Muriel Baltimore, please visit our flower store.