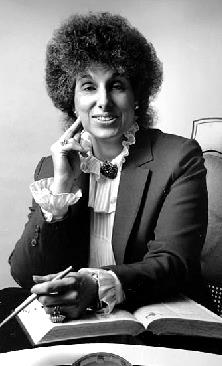 Martha was an attorney with offices in Yardley, Pa. She was a pioneer, a woman that blazed the way for those that followed. She was an Arthur Murry Gold Level Dance instructor of dance and performer in the 1960s. She went to Trenton State College, graduated second with a GPA of 3.96 and received her undergraduate degree in an age when women did not go to college. Martha proceeded to go to graduate school in 1975, at Villanova University Law School. She graduated from law school Magna Cum Laude. She was one of the first female attorney's in Bucks County. She practiced law in Bucks County from 1975 to 2012, and was a township solicitor in Middletown Township from 1982 to 1984.

She established First Choice Search & Abstract, Inc. Title Company. She passed the multi-state bar examination in the top 10% of the nation. Martha received the award nomination by WOW. She was awarded "Women of the Year." When she was president of B'nai B'rith, they were awarded the Most Improved Chapter." She had a national appearance in U.S.A. Today.

Martha was appointed to several different positions including a Bucks County Community College Trustee, and Bucks County Housing Development Corporation, where she served as president. Martha was politically active over her career. She ran campaigns for many candidates ranging from municipal, county, state, and national levels. Always maintaining the highest level of moral character, the keynote feature in every campaign was integrity.

She was always guided by a strong moral compass of what was right and wrong. She was awarded Woman of the Year from so many organizations for the pro bono work that she performed, that they cannot all be listed here. Martha wore several hats, wife, mother, businesswomen. Never letting anyone feel like they were not supported and left behind. She was an amazing person. Truly, a woman of honor and grace, and she will be missed by all.

She always put family above everything, never missing a concert or event for her children.

Relatives and friends are invited to graveside services Monday, at 2 p.m. precisely, at King David Memorial Park, 3594 Bristol Road, Bensalem. Shiva will be observed at the home of Howard Lindner, Monday following services, Tuesday and Wednesday, 5 to 9 p.m.

Contributions in her name may be made to a charity of the donor's choice.

To order memorial trees or send flowers to the family in memory of Martha Lindner, please visit our flower store.