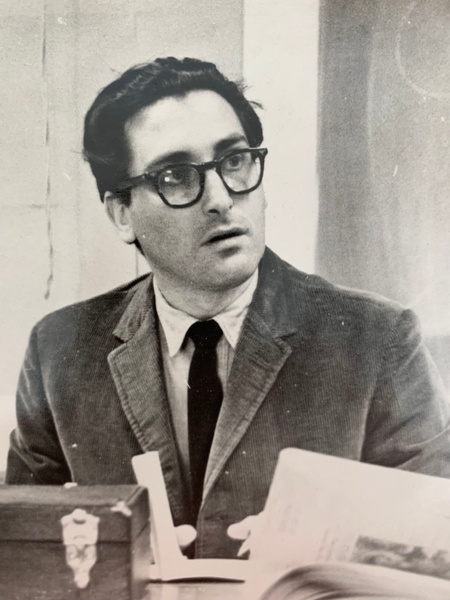 Mark Sacharoff, who died August 7, 2022, was born in Waterbury, Connecticut in 1929 to two Russian Jewish immigrant parents. They were too poor or perhaps indifferent to send him to Hebrew school, and so a neighbor paid for Mark to cram for several months so he could have his Bar Mitzvah. He attended Crosby High School and then Wesleyan College, the first in his family to attend college, where he majored in philosophy.

Mark excelled in college but after graduation in 1950 decided to pursue a career as a writer and playwright rather than as an academic or a professional. He moved to Greenwich Village where he fell in with other writers and artists, particularly beatniks. He loved this ten-year period and in later years talked of it often. He enjoyed drinks at the White Horse Tavern with Allen Ginsburg, Jack Kerouac, and Dylan Thomas. He read an early manuscript of Kerouac’s On the Road, but didn’t like it. He worked odd jobs to stay afloat, including as a night auditor at the Plaza Hotel.

By 1960, however, he had grown disenchanted with this life. He remembers one night he invited two friends to a party. While he was socializing, the two friends snuck into a bedroom to steal all the coats for drug money. That’s when he knew it was time to move on.

In 1961 he married Joan Larsh. They soon had a son, Laurent, and later a daughter, Ariadne. Upon Laurent’s birth, Mark bought a television that he carried home in his arms several blocks, beginning a lifelong love of TV. Over the years, the family would gather to watch Mary Tyler Moore, Fernwood Tonight, Phillies Games, Seinfeld, and Star Trek: Next Generation.

Also in the early 1960s, Mark went to Hunter to earn a PhD in English and wrote his dissertation on Shakespeare’s Troilus and Cressida. He argued that scholars were unable to appreciate that the play defied genre, and was neither comedy nor tragedy, but both, and satire as well. In 1967, Mark started as an English professor at Temple University in Philadelphia.

During the 1970s, Mark became a dedicated anti-Vietnam war activist. He organized numerous events and played an indirect role in the disclosure of the Pentagon Papers. The New York Times published an influential bibliography he gathered of the growing literature on American war crimes in Vietnam. New York Times reporter Neil Sheehan wrote a comprehensive essay summarizing potential American war crimes and credited Mark with his contribution, writing: “By this simple act he has significantly widened our consciousness.” (The New York Times re-printed Sheehan’s essay last year).

Mark also wrote plays and worked with Albert Benzwie at Theater Centre Philadelphia. His own play, The Front Door, was produced by the Playwrights’ Workshop, predecessor to the Theatre Center, at the YMHA. Mark was also an early supporter of the Painted Bride.

He is survived by his wife, Joan, his son, Laurent, his daughter, Ariadne Green, and her husband, Jon Green. Mark is also survived by his two grandchildren, Charlotte and Ezra Green. His family remembers him as a wonderfully warm, delightful storyteller. He was an open-minded intellect, a life-long leftist with a fascination for politics who nevertheless could see and understand even those most opposed to his beliefs.

Family and friends are invited to his Graveside Service on Sunday August 21, 2022, 11am Montefiore Cemetery, Jenkintown, PA 19046 (Section B)

Contributions in his memory may be made to UNICEF, particularly to help children in Ukraine.

To order memorial trees or send flowers to the family in memory of Mark Sacharoff, please visit our flower store.