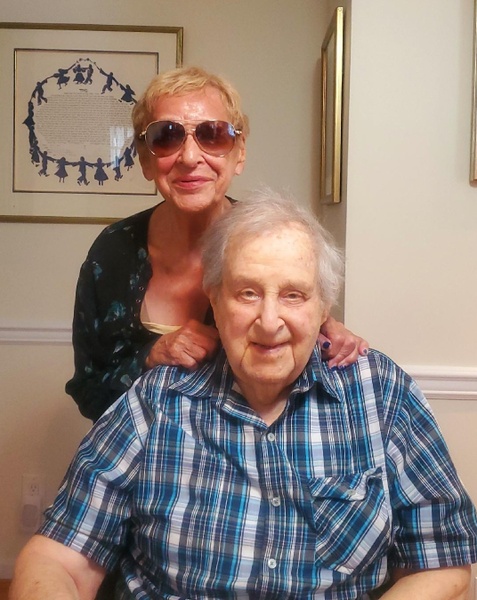 on July 27, 2022. Beloved husband of the late Loretta (nee Epstein); Loving father of Anita Yampolsky (Harry), Neil Myerov (Joan), and Benjamin Myerov (Susan); Dear brother of Doris Mann; Devoted grandfather of Aaron, Megan (Robert), Micah, and Celia; Adoring great-grandfather of Sebastian. Born January 21, 1928, in Philadelphia, Pennsylvania.  A composite of Russian-English stock, he comes from a family of musicians including a grandfather who was a cantor.  Recognized as a musical prodigy, he began formal private study at the age of five.  Practice was a necessity and two hours of practice before going to school was the norm.  His home was alive with music. There was a constant flow of musical activity; songwriters, arrangers, and vocalists, who would rehearse into the wee hours of the night.  Gifted vocally as well, he sang with his father professionally in synagogue choirs, in concerts, and radio broadcasts.  A truant at school; he could always be found at the main library on Logan Square, practicing in a soundproof studio, listening to recordings on the mezzanine floor or reading books on philosophy and science at a remote library table.  During his teen years he was asked to copy choral manuscripts for a prominent cantor, Joseph Mann.  Becoming great friends, they developed a choral society called Zimrah, which performed at exclusive functions.  During this time period, he accompanied rehearsals for the Philadelphia Opera Company, taught piano privately, transcribed music from recordings, made piano arrangements from lead sheets, performed at late night broadcasts on early talk & disc-jockey shows, accompanied Yiddish choirs at Town Hall, and started writing songs with a lyricist.  Early in his career, he became involved with several recording companies and publishing houses and did many instrumental & choral arrangements for them; but eventually decided to devote his composing energies to writing music for synagogue.  In 1945, a music scholarship led him to Temple University, graduating in 1949.  Master studies were in the field of education and he served the school district of Philadelphia as a teacher and music specialist, inspiring thousands of students with his own unique style of teaching.  Joseph had many wonderful years teaching at the J. Hampton Moore School where he was also in charge of assembly programs and school shows.  He retired from the school system in 1988.  Wherever he went, he would always be approached by former students who had fond memories of their time in school. In 1948 he became the music-director at Temple Emanuel.  After six years of making beautiful music he left to succeed Gedaliah Rabinowitz at Congregation Beth Sholom.  Since 1954, he has been choirmaster, organist-director and more recently composer-in-residence.  Piano teachers who inspired and guided him though his most intensive training were Della Schagrin, a prodigy of Ossip Gabrilovich, and Joseph Levine, pianist for the Philadelphia Orchestra and later conductor of the ballet in Texas.  Also, of great influence were Dr. Vincent Jones, Dr. Parkes Grant, and Dr. McCarthy in the field of composition.  Most inspirational was his father's brother, Joseph Myerow, a composer for Twentieth Century Fox Studios; best known for his songs, “You Make Me Feel So Young”, and “The Boardwalk in Atlantic City”.   Joseph Myerov has written three Friday evening services for cantor, choir, and organ: Simchat Shabbat, Shabbat Shalom, and Shabbat M'nuchah.  Orchestral works include a setting of Psalm 150 and Espana.  Joseph arranged choral music for chamber presentations, using a string quartet plus bass and either flute or oboe.  He is especially proud of the nineteen settings of the Hashkivenu prayer.  Also, amongst his writings are pieces for brass and woodwinds, plus many preludes for organ and piano. There are many children's songs with original lyrics and solo pieces for special occasions.  Wedding music, marches and a special setting of the Sheva B'rachot are a part of the repertoire.   He was devoted to his childhood sweetheart, Loretta, who he married in 1948.  She was the inspiration for many of the popular love songs he wrote.  No matter how busy Joe was, he always had time for his family. No one ever felt neglected.  Every summer he planned a family vacation always filled with adventure and mishaps.  When he traveled across the county he also made time to visit his many aunts, uncles, and cousins along the way. Relatives and friends are invited to Funeral Services, Sunday, 10 AM precisely at Goldsteins’ Rosenberg’s Raphael-Sacks, 6410 N. Broad St., Phila., PA. Int. Montefiore Cem. Shiva will be observed at the Yampolsky residence. Contributions in his memory may be made to Michael J. Fox Foundation for Parkinson’s Research, www.michaeljfox.org or Beth Sholom Cong., 8231 Old York Rd., Elkins Park, PA 19027, or Reform Congregation Keneseth Israel Music Arts Program, www.kenesethisrael.org/music-arts.

To order memorial trees or send flowers to the family in memory of Joseph Myerov, please visit our flower store.

Send a Sympathy Card
Make a donation to The Michael J. Fox Foundation for Parkinson's Research in memory of Joseph Myerov
​