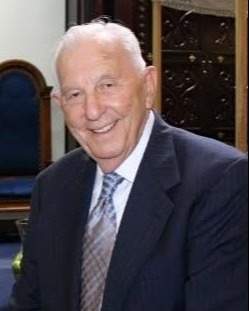 Joseph “Joe” Kaytes of Warminster, PA passed away on August 27, 2022. Born to Sarah and Jacob Kait in Philadelphia July 1, 1922, the youngest of three Albert and Claire. After his family had moved to Atlantic City, NJ, prior to proudly serving in the Army during World War II, Joe with his ice cream box strapped on his shoulder walking on the beach in Atlantic City selling ice cream to his delight during the summertime.
During WWII, stationed with the 47th Depot Supply Squadron in Calcutta, India, he was honorably discharged in 1947 with the rank of Sergeant from the US Army. Joe joined a war veteran organization named " China, Burma, India Veterans Association" (CBI) a national organization, forming lifelong friendships.
After being discharged from the Army, Joe attended photography school and then started his first business, “Home Guild Photography”, specializing in weddings and baby pictures with his motto "Penny a pound". Joe enjoyed being creative in photography throughout his life, later learning to enhance his skills utilizing modern computer technology. Joe’s passion for photography and technology continued as a hobby throughout his long life.
After many years as a successful entrepreneur as a leader in the wholesale hardware industry until 1980, he later spent his full attention in residential real estate as an investor in Philadelphia which became his legacy. Joe always believed in giving back to his community delivering food for the local JCC's program "Meals on Wheels" which gave him such joy and satisfaction just seeing the smiles on the recipient's faces until the age of 95.
In 1952, Joe married Lillian Morrison. They had 4 children, Suzanne (Larry), Eric - of blessed memory (Beverly), Louise (Eric) and David (Sharon).  Joe was blessed and survived by 10 grandchildren (Ariel (Steven), Jeffery (Jessica), Tara (Andrew), Jeremy (Emily), Alex, Zachary (Melanie), Steven (Anna) Jenna, Evan & Dylan with 6 great-grandchildren. In later years after the passing of Lillian, Joe married Carol Syken forming a blended family with children Vicki (David) and Neil; 4 grandchildren (Juile, Benjamin (Hannah), Adam (Emma) and Noa, and additional 2 great grandchildren. Carol and Joe enjoyed family gatherings, traveling and many years with their close friends near and abroad.
Relatives and friends are invited to attend the Memorial Service, Tuesday, August 30, 11:30 AM precisely at Goldsteins' 310 2nd Street Pike Southampton, PA with interment immediately following at Shalom Memorial Park.  In lieu of flowers, friends are urged to make donations in honor of Joe of their choice.
To order memorial trees or send flowers to the family in memory of Joseph Kaytes, please visit our flower store.