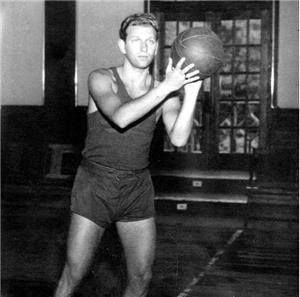 Ed played basketball at every level from schoolyard to pro. His career started with club teams, continuing through junior high and into South Philadelphia High School. He was a unanimous selection for the All-Public League team in 1944 as he was the league's high scorer and the first player in history to score over 200 points in a season, netting a record 203 points as a senior. He was also the lead scorer in the Jewish Basketball League while starring for Southern High.

After high school, he enlisted in the Navy and spent two years playing basketball at Bainbridge Naval Training Center, the youngest player on a team full of college standouts. His last game with Navy was in 1944 against Temple, during which he scored the winning basket, landing himself a starting position on Temple's team as a freshman.

Ed led Temple in scoring during the 1946-47 season with a 10.2 average and twice was the Owls' second highest scorer. He made over 90 percent of his free throws and played in 85 games. He graduated from Temple University in 1947, with an offer from Eddie Gottlieb of the Philadelphia Warrior's, who asked him to join the league, to which Ed would decline. He would go on to work as a food broker, helping usher products into major grocers such as Acme and ShopRite. In 2019, Ed was inducted into Temple's Basketball Hall of Fame as their 23rd highest scorer with 899 points.

In 2003, he was inducted into the Philadelphia Jewish Sports Hall of Fame for his achievements in basketball.

Ed was an outstanding family man and valued the time he spent with his loved ones the most. His love for the community was deep, as he was a resident at the Margate Towers and a loyal member of the Jewish Y for over 35 years.

"It's about family. If you don't have family, you've got nothing"
-Ed Lerner.

Contributions in his memory may be made to the charity of the donor's choice.
To order memorial trees or send flowers to the family in memory of Edward Lerner, please visit our flower store.