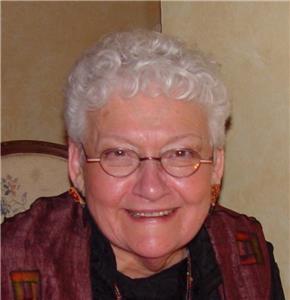 Betty Allanoff Gottlieb, who was thought to be intellectually disabled in kindergarten because she spoke only Yiddish, graduated high school at fifteen, and attained a PhD in Biochemistry at 61, died on the thirtieth of March 2021, twenty-four years and three weeks after the death of her beloved husband Harry Gottlieb MD.

Betty had unparalleled joie de vivre. A passionate learner, her interests were perpetually expanding. A first generation American born to Jewish immigrants from what was then the Russian/Polish border, Betty lived with her parents and extended family on South 4th Street in Philadelphia in the building that became Southwark and, most recently, Ambra restaurant. She studied Biochemistry at Temple University and continued this focus pursuing a PhD at Indiana University. As the only woman in the department she was often discouraged by her male supervisors.

Following a chance reacquaintance with Harry Gottlieb at Leary's Book Shop, they married in 1952 and she gave birth to David in 1954, followed by Diane in 1958. Betty turned her focus to raising her children, and supporting her husband, remaining the lifelong learner and excellent student in everything she pursued. During that time she became a gourmet cook, a passionate advocate and patron for the arts with special interests in music, crafts, photography and writing, a founder of craft fairs, and an avid gardener and horticulturist while immersing herself in her children's activities.

Over a decade later, Betty decided to go back to work, initially teaching at The Miquon School, where her children and, later, her granddaughter studied and then at the Alternative High School in Philadelphia. When Diane left for college Betty decided to resume her PhD. By then it was over 20 years since she had left the field. So much had changed that she had to begin her work in lipid metabolism from the start. Betty graduated with her PhD from the Medical College of Pennsylvania (MCP) while Diane was attending medical school there, and she pursued a postdoc at Jefferson University. When she finished her post doc she was in her early 60s and, despite publishing a number of academic papers, found it difficult to be hired for a permanent position. Again she refused to be slowed down by discrimination and she forcefully pursued other interests including horticulture, crafts, cooking, traveling with Harry, and helping with her grandchildren.

Uprooted by Harry's unexpected death in 1997, Betty ultimately made a life for herself immersed in the lives of her grandchildren and children as well as longtime friends. Present for every performance and presentation Bubby Betty encouraged the curiosity and creativity of her family and friends. Her impact was far reaching as she shared her joyful presence with everyone she met from the co-op to arboretums to the art museum,the orchestra and all of her other activities.

Though Betty's movements slowed over the two and a half decades following Harry's death, her desire to be involved, and her will to live were indefatigable. And though time posed increasing physical limitations she took every opportunity to renew neglected skills. After a stroke around Labor Day of 2009 Betty worked hard to maintain mobility and to regain her balance and her ability to swallow. By Thanksgiving she was eating again and resumed her love of gourmet cooking and eating out in her city with it's thriving food scene. Trips to the Theater, the Orchestra, museums and the library were often punctuated with wonderful meals. Betty also was able to restart piano at Settlement Music School in Germantown with an inspiring teacher. Decades earlier she had studied piano for over a decade at the main branch of Settlement where, though fearful of performing, she proved herself an accomplished musician. She participated in a Chair Yoga class which became a place of solace and camaraderie. And there was the garden, with every plant and every animal a source of joy and wonder for her.

Betty had a strong sense of justice, and felt personal turmoil with the state of the world throughout her life. She never missed an election, or the chance to stand up for what she felt was right. Though she disliked conflict, she was guided by kindness and a steady moral compass. She was determined to keep up with the world and the people around her. In her final years she would tell anyone who would listen that she needed to stay alive to vote a fascist President out of office, usually using less delicate and more humorous language. Even as her body failed her she persisted, trying her best to use what remained, to breathe, to smile, to enjoy people around her every day.

Betty was a true force of nature, a lover of details, of small things and moments. She had a way of finding the one positive part of an experience or a person or a day and everyone she touched loved her. Your joy brought her joy and the world is less nurturing without her.

With her shock of white hair, her big cheeks always full with a smile, and her warmth and love for everyone she met, Betty will be remembered as a loving, generous soul who cared for everyone and everything she touched. Contributions in her honor may be made to the Harry & Betty Gottlieb Fund of the Philadelphia Foundation.