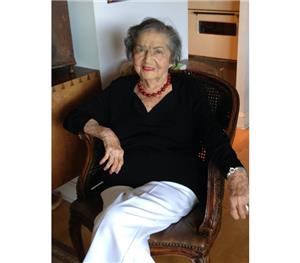 Beatrice Saul Dallett, a friend and inspiration for many, and the former director of the Community Arts Center in Wallingford, died peacefully in her home on Wednesday, September 15, 2021.

Bea was born to Cecilia and Louis Saul in Philadelphia, Pennsylvania, on May 27, 1920. As a young woman, she studied piano at Temple University, contributed office work to the WWII war effort, and met and married Louis Dallett. While she and Louis raised their children in Chester, she also helped run Lou Dallett Jewelers in Chester. Always active and involved, she studied at the Barnes Foundation, continued her piano studies, and was a member of Sisterhood at Ohev Shalom. Lou and Bea moved to Wallingford, Pennsylvania, from Chester and she began volunteering at the Community Arts Center (CAC) in Wallingford in various capacities. Spurred by her involvement with the CAC, she completed a certificate in arts management for cultural organizations at the Wharton School.

In 1980, Bea became the organization's first executive director, serving in that capacity until her retirement in 1999. Her accomplishments were many. While there, she built a diverse and strong program with an array of teachers in myriad art forms. The summer camp she began

is still beloved in the community. She also established the CAC's outreach program to increase access to the arts for children in under-resourced areas, with a focus on Chester. Near the end of her tenure, she conceived the idea and fundraised for a major expansion to the CAC ceramics studio, which was named in her honor, the Beatrice S. Dallett Ceramic Arts Building. The CAC gift shop, BeaDazzle Artisan Gift Gallery is also named after her. Paul Downie, current director of CAC, said this about Bea:

Bea was an enduring presence and inspiration to so many here at the CAC. She had a great deal of life force and positive energy and she invested much of it into the Arts Center. As a result, the work she did here has had a great impact on thousands of people over generations, and that impact will continue to grow. We are grateful to her and will remember her very fondly. As the third director of the CAC, I have looked to Bea and Debby Yoder (the second director) as role models and friends. At 101 years of age, Bea was still attending concerts at the CAC this spring. She has always been so full of life, it seemed she would live forever. Her life was long and very well lived.

Bea loved Philadelphia and all it had to offer. She followed the Phillies, the Sixers, and the Eagles (until she decided it was barbaric because of traumatic brain injuries). However, nothing could compare with the Philadelphia Museum of Art, the Philadelphia Orchestra, Chester cheesesteaks, or living in Swarthmore. When someone would say to her that a world-famous musician she had not heard of was giving a concert, she would characteristically say, "Well, they must not be that famous because they haven't played at the Philadelphia Academy of Music!" Although enamored of her city, she travelled extensively. As director of the CAC, she organized and led groups on riverboat tours throughout Europe, visited Russia, and spent years taking groups to Mexico.

Devoted and loyal to family, Bea knew the news of each one of them. Thus, she earned the nickname "WBEA." She served as the "collective hard drive" for recalling every detail of previous generations. With her sister, Racine, thrice daily phone calls; with family and friends, she spun the fibers that caught people in her web of friendship and community. Over her long life, she lost many from her generation, but she always built new connections with younger people who she nourished and loved and who kept changing the shape of her network.

After a lifetime of accomplishments, the true legacy of Bea is found in her relationships with friends and family. They remember Bea as a wonderful listener and truly inspirational woman. Friends use words like smart, savvy, spunky, sophisticated, hip and youthful, and loving and there are more. She brought a touch of something special to everything she did and every relationship she had. Bea can take credit for enriching and changing each of the lives she touched.

She was 101 years of age. It is odd to think of her death as premature. But, that is the truth. A lot of air went out of this big world with her passing.

A private burial will be held Sunday September 19th and a celebration of life will be held at the Community Arts Center at a later date to be announced.
To order memorial trees or send flowers to the family in memory of BEATRICE DALLETT, please visit our flower store.